Apparently the Olympic flame started out from Land's End this morning.

It's a place for starting journeys: with the Atlantic waves crashing in below and ocean to the north, west and south there is really only one way to go. I remember the excitement when I signed the End to End book in the Land's End Hotel back in 2004 and set off east to find John O'Groats. 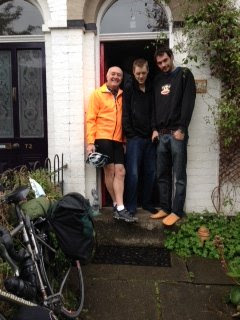 Leaving Southgrove Road did not have that drama. Although it was really good to be setting out right from the door I felt flat and unsure why I was doing it. But Helen, Lew and Matt gave me a good send-off and even the neighbours Jenny and Alistair came out into the cool, grey, damp morning.

Some people may find technical details of interest. My bicycle is a Van Nicolas Yukon, a Dutch-made titanium framed model, described by the makers as an audax or light tourer. I was running on 700 x 28mm tyres, which is really the narrowest you can ride on for carrying any sort of load. Long Eaton Cycles, where I had bought the bike originally, had swapped the original carbon forks for a steel pair, so that I could mount front panniers. The total weight of bicycle and gear was just under 30 kg. I worried that this was more than a light tour, and that the Fulcrum Racing 7 wheels were not really designed for this sort of weight.

The power unit was a 58-year-old Devonian four-chamber heart muscle, fuelled for most of its working life on a largely meat-free diet and lubricated by red wine and hand-pulled bitter, where possible.

Training for the ride had been limited and in my mind, inadequate. But I knew from previous experience that I could build up my fitness as the days went along. Well, it was a plan.

I headed up through Tinsley, remembering the years that I cycled out to the British Steel offices at Ickles. Onwards through Rotherham and Doncaster and on across the flatlands of north Lincolnshire. The cold notherly headwind made it a bit of a grind: in my imagination I had pictured myself rolling on through warm May sunshine. Not today.

Eventually I climbed over the little hill at Flixborough to be rewarded by the sight of the Humber Bridge, but then it was a cold slog into the wind along the muddy river. 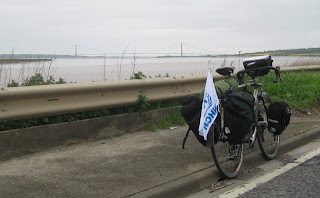 Crossing the bridge was exciting though: I have always loved suspension bridges and cycling or walking across them brings you into contact with the immense delicate strength of the cables and steel. Then in through Hull, trying to avoid the dual carriageway and find the docks. 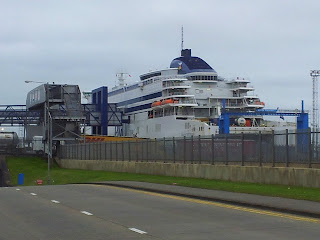 Seeing the ferry was a great relief: 68 miles on my first day was exhausting. So I collapsed into my cabin, stayed a while under the hot shower then had a nap. Later I made my way up to the buffet restaurant to carbo-load on potatoes. To the point of feeling sick, so nauseous, exhausted and aching I slunk off to my cabin by 9:30.
Posted by Bryan Hopkins at Saturday, May 26, 2012